Authorities are urgently searching for a “person of interest” in the Manhattan, New York City explosion which left 29 people injured on Sunday. The suspect is identified as 28-year-old Ahmad Khan Rahami, according to a memo circulated by the NYPD. 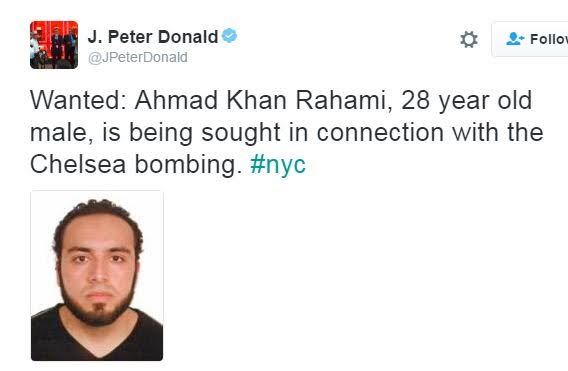 The FBI also released a wanted poster for Rahami with his photo, saying he is “wanted for questioning” related to the bombing. Rahami is a U.S. citizen originally born in Afghanistan, the FBI said. He is considered armed and dangerous.
The address of a home being searched by FBI agents in Elizabeth, New Jersey is linked to a person with a similar name. An emergency alert was sent out this morning asking people to call 9-1-1 if Rahami was seen.
The first explosion, which took place shortly after 8:30pm was reported to have originated from a device placed in a dumpster outside West 23rd Street between Sixth and Seventh Avenues.

After the explosion, a second device reportedly consisting of a pressure cooker attached to a mobile phone was found four blocks away in West 27th Street between Sixth and Seventh Avenues.