Former Super Eagles coach and member of the victorious Gold winning U-23 dream team at Atlanta 96, Sunday Oliseh has dismissed all comparison between the 1996 Dream team and Samson Siasia’s men who won Bronze at the just concluded Rio 2016 Olympics.
Nigeria’s biggest success on the footballing stage in the Olympics was winning the gold medal 20 years ago, but the current U23s squad managed by Samson Siasia failed to repeat the feat. 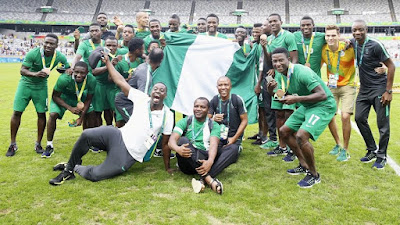 A couple of players in the 1996 team, including Austin Okocha, Sunday Oliseh, Uche Okechukwu, Emmanuel Amuneke and Daniel Amokachi played for Nigeria at the World Cup in the United States two years earlier before competing at the Olympics in 1996, but Mikel Obi was the only player with World Cup experience at the Rio Games.
Asked if the class of 2016 at Rio can be compared to the 1996 team he participated in, Oliseh toldfifa.com : “No, I don’t think so. Every country talks about its own golden generation, and Nigeria is no different. You can’t have several golden generations, or at least not in a short space of time.”
In this article: