Former heavyweight boxing champion Joseph Chingangu, who, according to Zambezi Reporters, fought the likes of Vladimir Klitschkov for titles in his heyday, was apprehended by students at UNZA, Zambia for allegedly stealing laptops and the students metted mob justice on him. 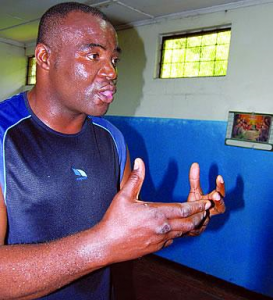 Earlier this year, the ex-boxing maestro was arrested for burglary and aggravated robbery. He was seen on camera stealing from a home and is also suspected to be in possession of a stolen vehicle.

According to Zambia Reports, police charged Chingangu with theft of motor vehicle, housebreaking and burglary. Reports gathered indicate Chingangu was captured on closed-circuit television (CCTV) breaking into a house and stealing K6,000, US$200, a 51-inch television set, 2 phones, shoes and clothes..