Police officers armed with pepper spray and batons marched onto Cannes beach, Nice, France on Tuesday and ordered a Muslim woman wearing a burkini to strip off, and after she did so, wrote down a fine for her.

Images of the confrontation on Tuesday show at least four police officers standing over the woman who was resting on the shore at the town’s Promenade des Anglais, the scene of last month’s Bastille Day lorry attack.
This comes after some French cities including Nice implemented bans on women wearing Burkinis, a garment worn by Muslim women that covers the body and hair, mostly used when at the beach. 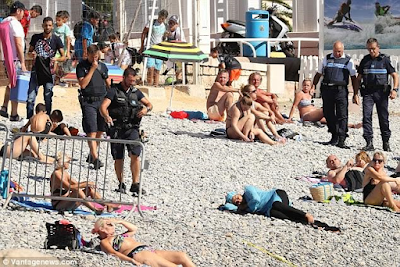 According to the AFP, another young Muslim mother was ordered off the beach at Cannes and fined for simply wearing a headscarf.
Three armed officers pointed a pepper spray canister in the 34-year-old’s face and told her she was in breach of a new rule outlawing swimming costumes that cover the entire body.
According to the woman, the ‘racist’ officers simply wanted to humiliate her in front of her children and other family members, even though she was not even wearing a burkini.

“I was sitting on a beach with my family,” said the 34-year-old who gave only her first name, Siam. I was wearing a classic headscarf. I had no intention of swimming.”

‘I wasn’t even planning to swim, just to dip my feet,’ said Siam, who was wearing leggings, a top, and a headscarf.
When asked why she was dressed ‘inappropriately’, Sian replied:

‘I didn’t know exactly what was going on, I hadn’t really followed the controversy’.

Sian at first refused to undress or to leave the beach, saying: ‘My children were crying as they witnessed by humiliation’.
Siam accepted an on-the-spot fine of around 9 pounds, and her details were recorded on what will amount to a criminal record. She said:

‘Today we are not allowed on the beach. Tomorrow, the street? Tomorrow, we’ll be forbidden from practicing our religion at all?

‘I’m in the country of human rights. I see no trace of the principles of liberty, equality and fraternity. I am outraged that this could happen in France.’
Last week, Nice became the latest French resort to ban the burkini. Using language similar to the bans imposed earlier at other locations, the city banned clothing that “overtly manifests adherence to a religion at a time when France and places of worship are the target of terrorist attacks”. 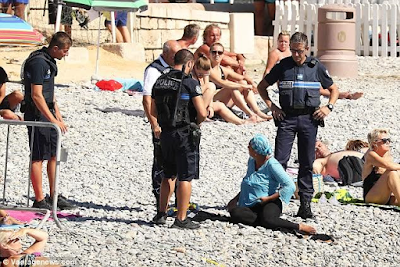 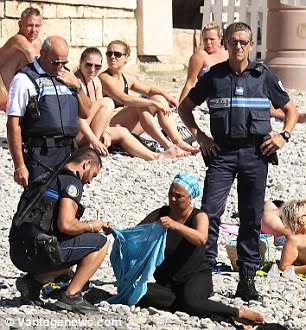 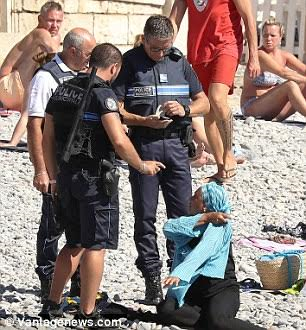