Read his piece below…

The truth has always been self-evident in that age-old statement that encapsulates the true character of the human race. It’s a universal statement that the true person will present itself in living colour when he’s gifted with either enormous financial resources, power or both.

While only a relatively few of the human species that has, or have had either or both of these privileges stay true to themselves and their very essence, therefore end up ennobling their societies and affectingpositively their environments in particular and humanity at large, history is replete with a huge majorityof this privileged few who debased their societies and trampled upon their people. They left their people and environments much worse off than they met them. They often failed to listen to the voice of reason until they came crashing down.Even with its inherent weaknesses, the human community is yet to find any viable alternative to democracy. As much as it can be utilized for mischief, democracy also has the capacity to bring out the best in people in the position of leadership in any human organization. Mrs. Rashida Bello, the wife of the youngest governor in Nigeria’s history, His Excellency AlhajiYahayaBello may well fall into this latter category of people in political leadership.

In a society that asks very little and demands less from its politically exposed persons and other public officials, Mrs. Bello is unarguably among the new breed of the nation’s First Ladies that demands more from herself without waiting to be asked. Even with the suddenness of her husband’s thrust into the state’s highest political office and thus the Number One citizen of the Confluence State, Mrs. Bello did not have to grope for what to doto add enduring value to her husband’s office. With the swift take-off of her pet projects, it was self-evident that she’s aware of her divine mission. It was just a matter of giving expression to the acorn seed already sowed in her by her Creator to become an oak tree. Therefore, rather than tosimply bask in the euphoria that automatically comes with the office of the First Lady, the wife of the governor hit her own ground running, to complement her husband in his efforts to lift up Kogi state from decades of socio-economic morass. She has already affected the lives of hundreds of thousands of the people of the state. As a woman of virtue coupled with an academic pedigree as an accountant, Mrs. Bello was acutely aware of what she wanted to do and knowledgeable enough to understand the modalities that must be emplaced to accomplishing the vision she had willed for her mission. Her vision for humanity in her dear state is that “the average woman in Kogi State must be healthy, economically stable as well as a participatory member in governance.”This may well be a variant of the women suffrage in the 21st century. This vision also includes the eradication of mother and child mortality rate as well as empower the youths of her state so that great leaders of tomorrow may emerge. It’s the kind of vision that exemplifies a more evolved woman who sees and acts beyond herself.

Perhaps it will be necessary to situate the philosophical underpinning of RashidaBello in order to understand the trajectory of her works since she came into the public consciousness in Kogi state. Sometimes in April 2016, the wife of the governor released a press statement that reflected her deep thoughts and her power of intuitive perception. She said inter alia that “every society around the world depends on the productivity of healthy women. If women are not healthy, the society is not healthy. It has become indisputable that no nation can develop without first developing the girl child to blossom into a responsible, empowered and resourceful woman.” Mrs. Bello went on to add that “healthcare is not all about drugs and other medicals, but the capacity to empower homes to provide healthy diets and quality living.” She said she’s “prepared to work with women around the state to threaten the comfort of poverty in our dear state.” It was a profound statement that exemplifies not only the quality of her being but also her thoughts.

To demonstrate her preparation for the laudable tasks ahead of her Mrs. Bello established the Kogi Women and Youth Advancement Foundation (KOWYAF), a multi-purpose intervention vehicle that has already impacted the lives of the people of Kogi in all the 21 Local Government areas of the state in less a year of its inception. KOWYAF is the ‘vehicle’ that Aisha Buhari, the wife of the President of the Federal Republic of Nigeria found befitting and suitable for her Future Assured Initiative to partner with for donation and distribution of food items to widows and the less privileged in the state.

In the relative short period of time since her husband’s assumption of office Mrs. Bello had commissioned three (3) primary health centres in the three Senatorial Districts of the state. She had distributed customised exercise books to pupils in the primary and secondary schools in the state. Her organization had embarked, and continues to train skilled women on how to grow and manage small businesses. Mrs. Bello hardly ventures out of the comfort zone of her husband, the governor, without some values added to the stations of the people of her dear state. She had visited both the General Hospital at Okene and the Specialist Hospital at Obangede. While she was at both hospitals, bills that probably would have given the already sick patients some migraine headaches after they might have been healed were paid by her. Mrs. Bello, in addition to this large-heartedness also gave stipends to the patients.

A meeting of the politically powerful with that of royalty are not always known to include an extension of invitation to the less privileged of society to bask in the accompanied revelry. But during Mrs. Bello’s courtesy visit to His Majesty Ado Ibrahim, the Ohinoyi of Ebira, a significant number of the state’s orphans and widows were also present. There she provided succour to these people. In furtherance of her belief that it is the value that one adds to the life of another that brings everlasting joy to both the giver and the taker, the wife of the governor celebrated her birthday not only with the high and mighty of her society but also visited two orphanage homes where food items and cash were given by Mrs. Bello. During the universally recognized Children’s Day that was also marked in her state, she demonstrated her appreciation of the salute she received from the children during the celebration by awarding scholarships to 20 school pupils in conjunction with Zenith Bank, Plc. Hundreds of people of the Islamic faith also had reasons to thank their Creator during the last Ramadan for sending a kind-hearted Mrs. Bello their way when they received foodstuff. Other gift items also went round the 21 Local Government Areas. 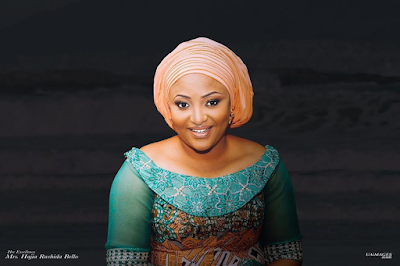 What would perhaps stand the test of time and a demonstration of the quality of her vision of all the laudable interventions of the wife of the governor that generations yet unborn are going to remember for decades to come was her June 19, 2016 audacious launching of a Road Walk. The road walk, which will be on-going, is a unique form of physical exercise to create awareness and the youths about the dangers of sickle cell, a preventable disease that still afflicts a significant Nigerian population due to ignorance of their genotype before courtship and establishing families. Mrs. Bello has once again blazed the trail in the Confluence State. She is setting up free genotype screening in secondary schools to let the youths and singles become aware of their genotype early before embarking on any relationship, let alone setting up families for procreation. These are some of the interventions of the wife of the governor that has become so impactful and hard-to-ignore in her dear state within a relatively short period of time. In Rashida Bello is a human confluence of commitment and value for the good governance of Kogi state.