A Nigerian East Carolina University student, Adedayo Adeniyi was verbally and physically assaulted by a white man at a Donald Trump rally last Wednesday after he was targeted and thrown out for being black, New York Daily News, reports
20-year-old Adeniyi decided to attend the Donald Trump rally in Fayetteville, N.C. not as a protester or demonstrator, but out of curiosity.
“I was there just to watch and experience the surreal moment of someone like Trump running for president and speaking to thousands of people,” he told the Daily News.
Without saying a single word during the entire event, Adeniyi was randomly targeted and thrown out of the event by police as seen and heard on video he recorded.
“At first I refused to leave because it was all just a product of being black at a Trump rally. Basically in that environment I’m guilty by association. But common sense told me to just listen to the cops and move along,” Adeniyi recalled.
On his cellphone video Adeniyi, being told he has to leave, can be heard saying:
“Whoa. Whoa. Whoa. That’s not me, that’s them. I don’t even know them. What? I don’t even know them. I don’t even know them”
The visibly shocked student reluctantly complied and was escorted down the stairs by the police.
“What happened next caused me to lose faith in America. The man at the end of the video is a moment I’ll never forget,” said Adeniyi. 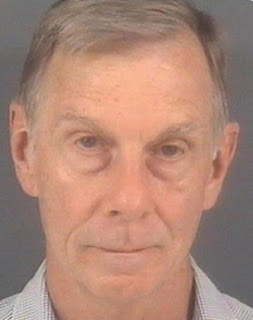 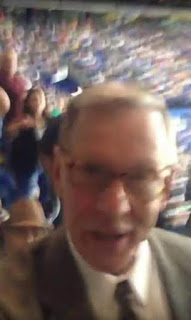 One of Trump’s supporters, a middle aged white man, looked him directly in the face and said, “F–k you, F–k you,” right before slapping Adeniyi in the face.
“The hate in his eyes. The words. The hate in those words. The slap. It was disgusting and sad. At that moment I believed that America will stay and continue to be a hateful and bigoted country,”
“These are presidential candidate rallies. Not a KKK rally. The fact that I experienced hate at a candidate rally tells you everything you need to know about Donald Trump and the people that support him. People will act more hateful and racist in environments that they feel not only encouraged to do it, but accept it as normal,” he added.
Meanwhile the man who assaulted Adeniyi has been identified as Jason Wilton Wetzel (pictured is his mugshot and a screenshot from the video recorded by Adeniyi) seems to have shown some remorse.
“I can’t believe I did that. It was me, but I’m not a hateful man. I just got caught up. When I saw the video all over the news of me doing that to that young man, I was just disgusted with myself.” said Mr Wetzel, who confirmed to the Daily News that it was him seen physically and verbally assaulting a Adeniyi.
Investigators said Wetzel, 70, moved to North Carolina from Georgia when his job with the military was transferred to Fort Bragg. According to detectives, Wetzel is accused of voting in both states in the 2012 primary and general elections as well as voting in both states in 2014.
“I have no criminal background,” Adeniyi told The News. “This man does. So please explain to me who the real thug is. A young black man who is a junior in college majoring in medical laboratory science and who also happens to hold many leadership positions there? Or is it this man, with a criminal background who attacked me for no reason?”
Reached by phone Monday, Wetzel claimed that it was indeed him on the video, but said:
“I’m not a racist or hateful, I just got caught up. I can’t explain it. I want to apologize to this young man and maybe take him out to dinner or something.”
In this article:Montage Africa