A Florida woman, Carmen Chamblee, 19, has been arrested and charged with second degree arson for setting fire to a car she thought belonged to her ex boyfriend. Turns she set ablaze the wrong car.

According to ABC, authorities believe that Chamblee who has since been arrested, intentionally set a Honda on fire earlier this month. Security camera caught footage of the incident and it is believed that she thought that the vehicle belong to her ex boyfriend.
However, the shocked owner of the Honda, Thomas Jennings, insists that he has never seen her before and has no idea who she is. His roommate alerted him that his car was on fire and even though they tried to extinguish the blaze with water, it was too much.

Investigators found that a rag was set ablaze and placed in the gas tank of the vehicle. Chamblee would be arraigned in court soon.

More photos and a video of the incident below… 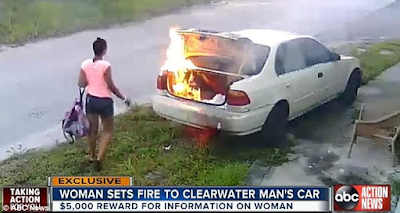 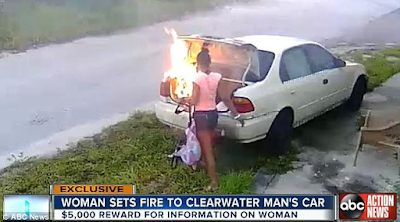